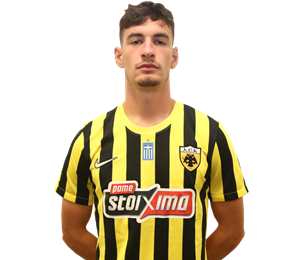 EFTHYMIS CHRISTOPOULOS \\ Attacker
Efthymis Christopoulos was born on September 20, 2000 and plays as an attacker. He joined AEK Academy in the summer of 2015 from Achaikos Academy. Four years later signed a professional contract.

As AEK's U19 captain, scored 11 times in the first half of the 2019-20 season, forcing Massimo Carrera to take him to the first team. On 5/2/2020 he made his debut in a Cup match against Panetolikos and on February 2020 extended his contract until 2023. He has international participations with Greece U16, U17, U19.
GALLERY \\
RELATED NEWS\\
SEE ALL ARTICLES