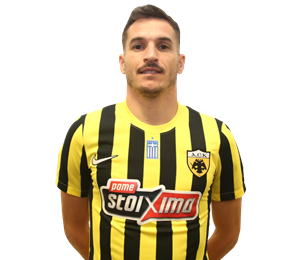 HELDER LOPES \\ Defender
Hélder Filipe Oliveira Lopes is a left back and was born in January 4, 1989, at Vila Nova de Gaia of Porto.
He made his first steps in football at the youth academies of Coimbrões, Padroense and Candal in Portugal. In 2008, at the age of 19 he signed his first professional contract with Parma.
The summer of 2012 he returned to the Portuguese League for S.C. Beira-Mar and one year later he transferred to F.C. Paços de Ferreira, where he stayed for three years. Last summer he moved to Primera Division for UD Las Palmas, where he made 17 appearances for both La Liga and Copa del Rey competition. He signed for AEK FC in June 2017 and performed very well in his first season, celebrating the league title with AEK. On January 2019 he extended his contract with the club until the summer of 2022.
GALLERY \\
RELATED NEWS\\
SEE ALL ARTICLES