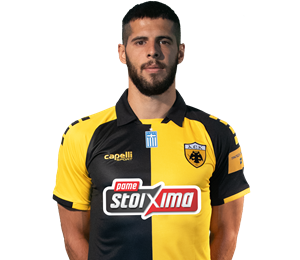 EMANUEL INSUA \\ Defender
Emanuel Insua was born on April 10, 1991 in Buenos Aires, Argentina. He was a Boca Juniors youth graduate and he made his professional debut on 25 April 2012 in a match against Olimpo.

In the summer of the same year he was acquired by Udinese and loaned out to Newell's Old Boys (15 appearances, 2 goals) and Racing Club (22 appearances, 1 goal). In the summer of 2017 came to Greece for Panathinaikos and in the three following years recorded a total of 70 appearances (4 goals, 3 assists) in all competitions.

In August 2020 he signed a three-year contract with AEK FC.
GALLERY \\
RELATED NEWS\\
SEE ALL ARTICLES