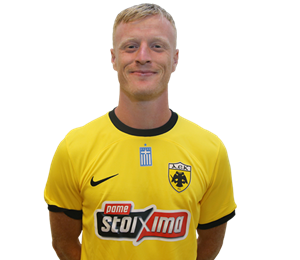 JENS JONSSON \\ Midfielder
Jens Jonsson was born on January 10, 1993 in Aarhus, Denmark. At the age of 12 he joined the Academy of his hometown team and in 2011 he made his debut with the Aarhus GF first team in an official game. In total, he played in 120 games with the Danish club (2 goals, 4 assists).

In August 2016, he was transferred to Konyaspor. With the Turkish team, he won the Cup and the Super Cup in 2017, while he also competed in the UEFA Europa League. He made a total of 119 appearances in all competitions (6 goals, 3 assists). In the summer of 2020 he moved to Spain on behalf of Cadiz and he played in 61 games over the next two years.

He has been international with all the youth national teams of his country and in November 2020 he made his debut in the Men's National Team of Denmark. In July 2022 he joined AEK FC, signing a four year contract.
GALLERY \\
RELATED NEWS\\
SEE ALL ARTICLES