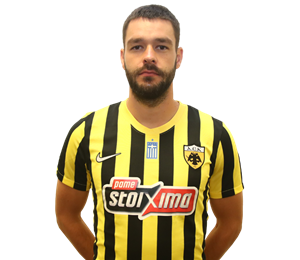 YEVGEN SHAKHOV \\ Midfielder
Yevgen Shakhov was born on November 30th, 1990 in Dnipropetrovsk, Ukraine. He made his first football steps in the academy of Vidradnyi Kyiv, and then moved to Zmina-Obolon Kyiv. At the age of 15 he joined the academy of Dnipro, team with which he signed his first professional contract two years later.

In Dnipro he played from 2007 to 2016 and made a total of 127 appearances, scoring 17 times and making 13 assists. In the summer of 2016 he came to Greece for the first time on behalf of PAOK. For the next three years he made 117 appearances (21 goals and 7 assists) for the team of Thessaloniki, winning a Championship and three Greek Cups.

In the summer of 2019 he moved to Italy for Lecce. In 2019-2020 season he played in 24 games, scored one goal and had 3 assists with the italian team. He played for all the youth National Teams of Ukraine and since 2016 he is international with the Men's National Team.
GALLERY \\
RELATED NEWS\\
SEE ALL ARTICLES