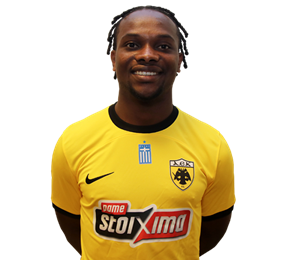 LEVI GARCIA \\ Attacker
Levi Samuel Garcia was born on November 20, 1997 in Santa Flora, Trinidad. At the age of 14 he started playing for Shiva Boys' Hindu College and at the same time joined the youth program of T&TEC, team with which he made his debut in the first division of the Trinidad and Tobago Championship at the age of 15.

However, in 2013 T&TEC was forced to suspend its football activities due to financial problems, with the player continuing to play for Shiva Boys' Hindu College and at the same time for the local Siparia Spurs youth team. In March 2014, he signed a two-year contract with Central FC, a first division team, but before he even made his debut, he was spotted by Dutch agent Humphry Nijman.

After a dispute that was resolved with the intervention of the Trinidad and Tobago Football Association, it was agreed to allow to allow Garcia a trial in the Netherlands. In February 2015 he signed with AZ Alkmaar and almost a year later, on January 24, 2016 he made his debut with the first team entering as a substitute in a game with Feyenoord.

With AZ Alkmaar jersey Garcia played 43 games (4 goals - 6 assists) until the middle of the 2017-18 season, when he was loaned to Excelsior (15 appearances, 1 goal - 2 assists). In May 2018 he moved to Israel for Hapoel Ironi Kiryat Shmona, with which he played in 22 games (3 goals), while in the summer of 2019 signed for Beitar Jerusalem, with whose jersey played in 33 matches, scoring 6 times and assisting 3.

At the same time, Levi Garcia was international with almost all the youth national teams of Trinidad and Tobacco, being now a key member of the Men's National Team. On September 20, 2020, he signed a five-year contract with AEK FC.
GALLERY \\
RELATED NEWS\\
SEE ALL ARTICLES