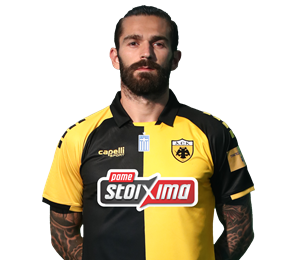 MARKO LIVAJA \\ Attacker
Marko Livaja was born in August 26, 1993 at Spilt, Croatia. He made his first steps in football at the academies of NK GOŠK, Omladinac Vranjic, GNK Dinamo Zagreb and HNK Hajduk.

In 2011, when he was 18 years old, he transferred to Inter Milan, where he lifted the youth European Competition NextGen Series and he also made six appearances with the first team. During his spell at Inter Milan he played on loan for Lugano and Cesena. Next stop to his career was Atalanta and in 2014 he transferred to Rubin Kazan for 6 million euros. In 2016-17 season he played 25 times at the Spanish club UD Las Palmas and he scored 5 goals.

He is α member of AEK squad since July 2017 and he was one of the most useful players last season with 8 goals and 4 assists in 27 matches. Furthermore he was voted in the best team for 2017-18 Super League season.

He is International with all the youth national teams of Croatia from U15 to U21, with 54 appearances and 24 goals. On September 2018, he was called up in Croatia National Team for the first time and played against Portugal and Spain for UEFA Nations League.
GALLERY \\
RELATED NEWS\\
SEE ALL ARTICLES