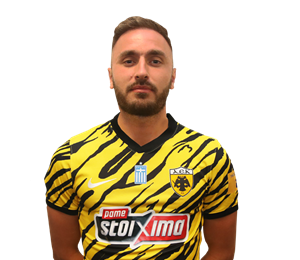 MUAMER TANKOVIC \\ Attacker
Muamer Tankovic was born on February 22, 1995 in Norrkoping, Sweden. He made his first football steps for his local team Hageby IF and at the age of 10 joined the IFK Norrkoping Academy. Before he even make his professional footballer debut, he was acquired by Fulham at the age of 16.

With the U23 of the English club, he made 20 appearances (9 goals, 2 assists), while he also counted 6 appearances with the first team. In 2014, at the age of 19, he moved to the Netherlands for Alkmaar, with whom he played in 77 games over the next three years, scoring 16 times and making 12 assists. At the same time, he had 29 appearances, 19 goals and 7 assists with Alkmaar U21.

In 2017, he returned to his homeland on behalf of Hammarby. For the Swedish club he played until the summer of 2020 in 93 matches, scoring 34 times and making 15 assists. He was also international with all the youth National Teams of Sweden and since 2014 is a member of the Men's National Team.
GALLERY \\