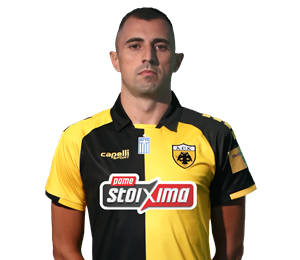 NENAD KRSTICIC \\ Midfielder
Nenad Krsticic was born in Belgrade on July of 1990 and started his professional career from OFK Beograd during 2007-08 season. Sampdoria purchased him on 1 September 2008 and he remained eight years at the Italian club (more than 100 performances in the domestic competitions), along with a six-month loan spell at Bologna during the second half of 2014-15 season. On July 25th, 2016, Nenad Krsticic joined Spanish side Alaves and 13 months lates he returned to his motherland, signing two-season contract with Red Star Belgrade. He helped his team to reach 2018-19 UEFA Champions League's group stage and became a regular member of Serbia National Team before joining AEK FC in January of 2019, with contract until the summer of 2022.
GALLERY \\
RELATED NEWS\\
SEE ALL ARTICLES