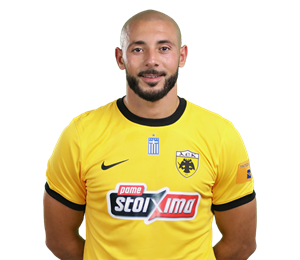 NORDIN AMRABAT \\ Attacker
Nordin Amrabat was born on March 31, 1987 in Naarden, Netherlands and started his career at Ajax Academy. He played professionally for the first time in Omniworld. With 14 assists and 14 goals in 36 games he quickly transferred to Venlo and a year later to the Dutch champion, PSV Eindhoven.

From that point he started a series of high-cost transfers, first in the Turkish league with Kayserispor and Galatasaray, then in the Spanish La Liga with Malaga and Leganes and in the English Premier League with Watford. Over the last three years he played in Saudi Arabia for Al-Nassr.

Nordin Amrabat has played for all the youth national teams of Netherlands and then chose the Man’s national team of Morocco with which he played in the 2012 Olympic Games, while he was also a key player in the World Cup of 2018 in Russia. He joined AEK FC in the summer of 2021, signing a two-year contract.
GALLERY \\
RELATED NEWS\\
SEE ALL ARTICLES