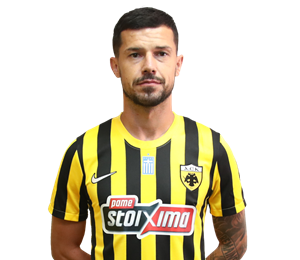 DARKO JEVTIC \\ Midfielder
Darko Jevtic was born on February 8, 1993 in Basel, Switzerland. At the age of 8 he joined the FC Basel Academy and made his professional debut at the age of 19, in a league match against Grasshopper, winning that season (2012-13) the first title of his career, the Swiss championship.

In the 2013-14 season he was loaned to Wacker Innsbruck in Austria, where he played in 20 games (3 goals, 2 assists). In the summer of 2014 he was loaned to Lech Poznan. With the Polish team had an excellent season, making Lech to proceed to his transfer in January 2015.

The Swiss attacking midfielder stayed in Poznan until January 2020 and during those years he played with Lech in 192 games in all competitions (37 goals, 43 assists), winning the Polish Championship in the 2014-15 season and the Super Cup in the 2015-16 season.

In January of 2020, he was transferred to Rubin Kazan. During his one and a half year stay in Russia he had 45 appearances (4 goals and 3 assists). He has been, also, international with all youth swish national teams since the age of 15.
GALLERY \\
RELATED NEWS\\
SEE ALL ARTICLES