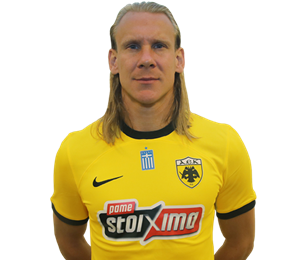 DOMAGOJ VIDA \\ Defender
Dimagoj Vida was born on April 29, 1989 in Nasice, Croatia. At the age of 14, he joined the Osijek Academy, making his professional debut at the age of 17. With the Croatian team he made a total of 90 appearances (6 goals, 4 assists) until the summer of 2010, when he was transferred to Bayer Leverkusen.

In Germany he played for one season (2010-11) and made 9 appearances in total (8 in the UEFA Europa League). In the summer of 2011, he returned to Croatia for Dinamo Zagreb and played in 68 games (8 goals, 5 assists) until January 2013, when he transferred to Dynamo Kyiv, signing a five-year contract.

With the Ukrainian team, he played in 160 matches (13 goals, 8 assists) until the end of his contract in January 2018, with Turkey and Besiktas to follow. In the Constantinople team, he made 168 appearances in all competitions, scoring 16 times.

He was an international with all the youth National teams of Croatia and made his debut in the Men's National Team at the age of 21. Since then he has been a key member of Croatia, having also worn the captain's armband.