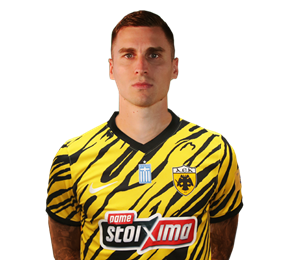 OGNJEN VRANJES \\ Defender
Ognjen Vranjes was born on October 24, 1989 in Banja Luka, Bosnia and Herzegovina. He played football for Borac Banja Luka Academy since his childhood, while he also played for three years (2006-09) for the first team.

He joined for the first time AEK FC in January 2017 and became beloved from the fans for his effective, dynamic game. He was a key member of the team that was crowned Champion in, while he became the first defender in the history of the Greek Super League to score a hat-trick (AEK-Xanthi 4-0 on 18/2/2018).

In the summer of 2018 he was sold to Anderlecht and a year later he returned to AEK on loan from the Belgian team, to make 26 appearances (2 goals) in the 2019-20 season. In July 2021 he made his second return, this time on a transfer and signed a 2+1 year contract with our team.

For a number of years he was a key member of the Bosnia and Herzegovina Men's National Team, with which he made a total of 38 appearances.
GALLERY \\
RELATED NEWS\\
SEE ALL ARTICLES