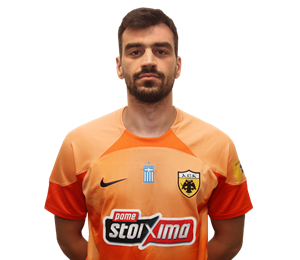 PANAGIOTIS TSINTOTAS \\ Goalkeeper
Panagiotis Tsintotas was born on July 4, 1993 in Katerini. He stared his career at the youth academies of Pierikos and he moved to Levadiakos in 2012. He made his professional debut in Super League on 26/04/2015 against Atromitos.

During his career at Levadiakos he made 21 appearances in all competitions. Tsintotas signed for AEK FC in June 2017 and he was the first goalkeeper for half of the season 2017-18 matches, that our team won the title. Not only he established himself in the first team in his first season, but he also won his first tittle with AEK

He has also made two international appearances with Greece U19. In August 2018 he extended his contract with AEK until the summer of 2023.
GALLERY \\
RELATED NEWS\\
SEE ALL ARTICLES