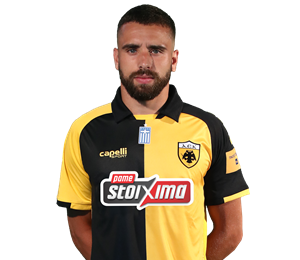 PAULINHO \\ Defender
Paulinho Mota was born in Portugal on July 13th, 1991 and began his career from the Academy of FC Porto, where he worked with manager Miguel Cardoso. He is a former Portugal U-16 international and his main position is right defender.

Between 2010 and 2019, Paulinho performed for five teams of his motherland (Leixões SC, Moreirense FC, CF União Madeira, GD Chaves, SC Braga), with more than 150 official performances in all competitions.

The 28-year-old Portuguese defender officially joined AEK FC in June of 2019, signing contract until the summer of 2022.
GALLERY \\
RELATED NEWS\\
SEE ALL ARTICLES