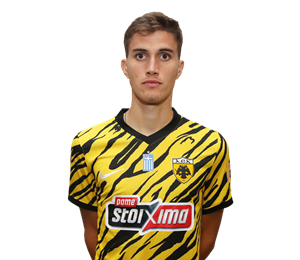 ZIGA LACI \\ Defender
Žiga Laci was born on July 20, 2002. At the age of six, he joined the Academy of ND Mura. Due to his impressive performances, he progressed quickly through all the youth game classes. His most admirable performance was in the 2016-17 season, when he scored seven goals in ten matches with the U15 team.

In the summer of 2018, while he was still competing in both U17 and U19 teams, he became the youngest player in the history of Mura to sign a professional contract (for three years). On May 11, 2019, at the age of 16 years, nine months and 21 days, he made his debut with the first team, as a substitute in a game with Krsko.

In total, he played in four Slovenian league games, scoring one goal and for the UEFA Europa League qualifiers match against Maccabi Haifa. Likewise, he has also played for the Slovenian national teams U17, U18 and U19. He joined AEK FC on January 2020.
GALLERY \\
RELATED NEWS\\
SEE ALL ARTICLES