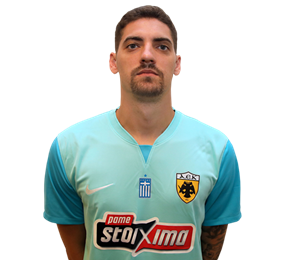 CICAN STANKOVIC \\ Goalkeeper
Cican Stankovic was born on November 4, 1992, in Bijeljina, Bosnia and Herzegovina, but moved to Austria as a child. At the age of 16 he joined the second team of SV Horn and two years later was promoted to the first team, making a total of 37 appearances.

In 2013 Cican transferred to SV Grödig and over the next two years made a total of 61 appearances. In the summer of 2015 he made the big step in his career, with his transfer to FC Red Bull Salzburg. The next six years were fantastic for him and his team, as they won six Austrian championships and five cups.

In total he wore the FC Red Bull Salzburg jersey in 152 appearances in all competitions, 100 of them in the league, 19 in the UEFA Champions League (qualifiers and group stage) and 7 in the UEFA Europa League.

He was an international with the U21 of Austria and on September 6, 2019 he made his debut with the Men's National Team of Austria. He joined AEK FC in June 2021, signing with our club until the summer of 2025.
GALLERY \\