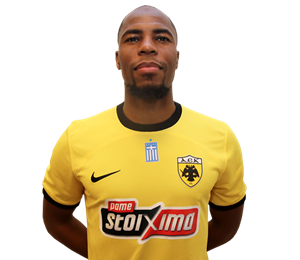 DJIBRIL SIDIBE \\ Defender
Djibril Sidibe was born on July 29, 1992 in Troyes, France. At the age of 8 he joined the Academy of his hometown team. In the 2009-10 season he made his debut with the first team, which was playing in the third division of France, while in September 2010 he made his professional debut against Grenoble.

With ESTAC Troyes he played in 44 games (1 goal, 2 assists) and after helping to promote to the first division, he was transferred to Lille for 2.5 million euros. He made his Ligue 1 debut at the age of 19 against OGC Nice, and he marked it with a goal.

With Lille he made a total of 119 appearances (11 goals, 7 assists), played in the UEFA Champions League, while in 2016 he reached the final of the French Cup, in which he even scored, but his goal against Paris was not enough (2- 1).

In July 2016, Monaco paid 15 million euros to acquire him, with him signing a five-year contract. In his first year in Monaco, Sidibe helped his team to win the league after 17 years and he was named to the UNFP Ligue 1 Team of the Year.

At international level, Sidibe has played for all France's youth national teams and in September 2016 he received his first call-up to the Men's National Team and he was member of the team that won the 2018 World Cup. In September 2022 he signed a two year contract with our club.
GALLERY \\
RELATED NEWS\\
SEE ALL ARTICLES