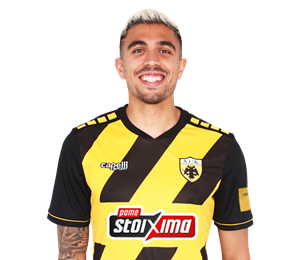 VICTOR KLONARIDIS \\ Attacker
Victor Klonaridis was born in July 28, 1992 at Seraing, Belgium. He stated his career at the youth academies of AEK FC and he made his first professional appearance during the season 2010-11. Before he signed for Lens in 2012, he made 23 appearances for AEK FC in total and scored five goals.

During his spell at RC Lens he loaned to R.E. Mouscron in Belgium. From next season he played for Panathinaikos, where he stayed for three years, where he won the Greek Cup of 2014. In 2016 he signed for RC Lens and he moved to Panathinaikos for the second half of the season 2016-17. Klonaridis has been part of the national team of Belgium U20.

He is member of AEK FC squad since June 2017 and he celebrated the winning of the title having involved in 12 matches (1 goal). His goals against Celtic FC and MOL Vidi were crucial for the qualification of AEK to 2018-19 Champions League's group stage, while he also scored twice against SL Benfica at OACA Stadium.
GALLERY \\
RELATED NEWS\\
SEE ALL ARTICLES