The Olympic Athletic Centre of Athens (OAKA) is the home ground of AEK Athens since 2004. It is located in Maroussi and it is named after the first modern Olympic marathon race winner in 1896 Spiros Louis. Its capacity stands at 68.069 and it is the largest and most modern Stadium in the country.

The Olympic Stadium opened its doors in 1982 and since then it has hosted many important sports events, such as World and European championships and Football European final competitions, but the highlight was the Olympic Games of 2004, for the purposes of which the roof was added, designed by the famous architect Mr. Santiago Calatrava. The Stadium has also hosted major artistic events, even Rally Racing and motocross.

AEK has used again in the past Olympic Stadium as home ground, the years 1985 to 1987, but then returned to New Philadelphia. AEK Athens has won six of the ten Cup Finals at OAKA (1983, 1996, 2000, 2002, 2011, 2016) and has also celebrated the mathematical win of the 1989 championship with the win 1-0 against Olympiakos. AEK uses continuously OAKA as home ground since autumn 2004 and celebrated the 12th league title of their history after the 2-0 win over Levadiakos in April 2018.
OAKA WEBSITE FIND US ON MAP STADIUM VIEW
STADIUM PLAN \\ 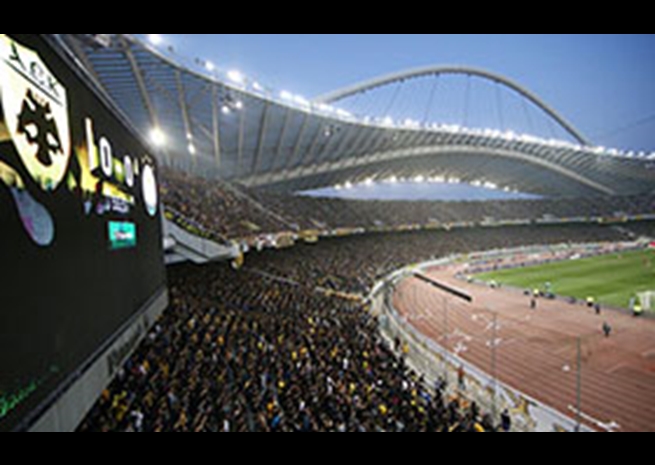