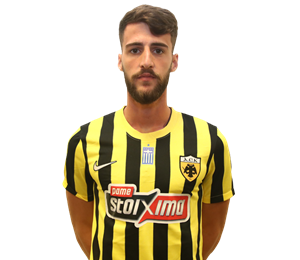 ALEXANDROS PARRAS \\ Defender
Alexandros Parras was born on May 12, 1998. He made his first football steps at AO Artas. At the age of 16 he joined the Panetolikos FC Academy. At first he played for U17 team of Panetolikos and then he was promoted to U19, making a total of 30 appearances.

In the summer of 2017 he signed his first professional contract and on October 21 of the same year he made his debut with the first team, in a game against AO Kerkyra for the Greek Super League. He made a total of 12 appearances with the team of Agrinio for championship and cup, while he was also international with the National Team U21. He joined AEK FC in the summer of 2021.
GALLERY \\
RELATED NEWS\\
SEE ALL ARTICLES