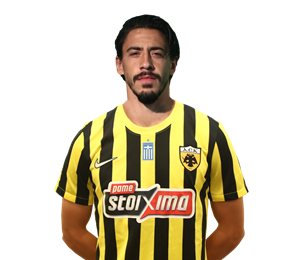 ANDRE SIMOES \\ Midfielder
André Luís Gomes Simões was born on December 16, 1989. The Portuguese footballer began his career in Moreirense F.C, where he made 51 appearances and scored 5 goals in the league by the summer of 2013 onwards. He plays as defensive midfielder and before Moreirense F.C He also played for Padroense and Santa Clara. He signed for AEK FC on January 2015 and became part of the team in June 2015, being an irreplaceable member of the squad.

During the season 2016-17 he made 35 appearances in total and scored his first ever goal for AEK FC at the League. He was the captain of the team in the most of the matches of 2017-18 season due to Petros Mantalos' injury and he was one of the key players in the glorious campaign of Super League 2017-18. In February, he extended his contract with AEK FC until the summer of 2023.
GALLERY \\
RELATED NEWS\\
SEE ALL ARTICLES