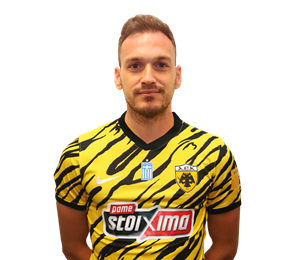 MICHALIS ΒAKAKIS \\ Defender
He was born in Agrinio on March 18, 1991 and he plays as a right-back and midfielder. He played for Panaitolikos from 2008-2014, except for the 2011-12 season, when he played for Chania. He used to be a first team option during the spell of AEK FC in the Football League(2014-15), when he also became member of the Greek National Team. During the play offs of Football League he got serious injured and came back to action in 2015-16. During the season 2016-17 he played 15 times at both League and Cup competition and he signed a new contract until 2020.
Michalis had constistently good performance in every role was assigned to him by Manolo Jimenez, and he was a key factor player for the winning title, as well as the successes of the team in Europe and the Greek Cup. After 3 years he played again for the National team, while he was voted in the best squad of the glorious for AEK 2017-18 season in Super League.
He also was called after three years in the National Team and in August he extended his contract until the summer of 2023.
GALLERY \\
RELATED NEWS\\
SEE ALL ARTICLES