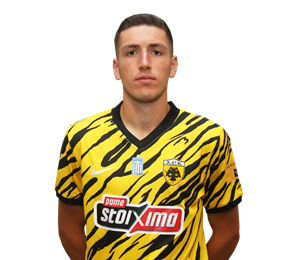 MICHALIS KOSIDIS \\ Attacker
Michalis Kosidis was born on February 9, 2002 in Thessaloniki. He is 1.91 m. tall and plays as a CF. He made his first football steps in Ilioupoli Thessalonikis and at the age of 12 he joined the Iraklis FC Academy.

In 2017, at the age of 15, he was acquired by the AEK Academy and was a member of U 15, U17 and U19 team. In season 2020-21 he managed to score five goals and make one assist in just seven matches played by AEK U19 before the championship was stopped due to the pandemic. He was also international with Greek National Team U18. In February 2021 he signed a professional contract with AEK, until the summer of 2026.
GALLERY \\
RELATED NEWS\\
SEE ALL ARTICLES