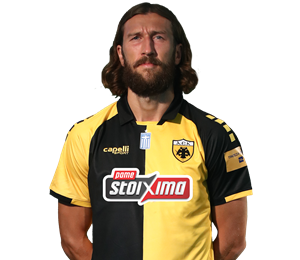 DMYTRO CHYGRYNSKIY \\ Defender
Dmytro Chygrynskiy was born on November 7, 1986 at Iziaslav of Ukraine. He began his career at Shakhtar Donetsk B. After a loan spell at Metalurg Zaporizhya in 2005-06, became a key member of the Ukrainian team, winning two Leagues (2006, 2008), the Ukrainian Cup 2008 and of course the Uefa Cup 2009 after his team defeated Werder Bremen 2-1 in extra time. After four years at the first squad of the team, Chygrynskiy had 134 appearances and scored 10 goals.
In 2009, Pep Guardiola spent 25 million euros in order to take him to Barcelona, where he stayed for one year and won the Spanish League (14 appearances). He returned to Shakhtar Donetsk for 15 million euros, making with the team 3 doubles in a row (2011, 2012 and 2013)!
In 2013 moved to Dnipro Dnipropetrovsk, where he stayed until the summer of 2016, when he signed for AEK FC as a free transfer. During his first year at AEK FC Dmytro was a starter from the beginning, showing his talent inside the pitch.
Dmytro Chygrynskiy was part of the youth teams of the National team of Ukraine, having played also at the U21 European Cup Final of 2006 (Netherland won by 3-0). At the main quad of the National team, Dmytro has 29 appearances, while he was part Ukraine squad at the World Cup 2006, under the rules of Oleh Blokhin.
In the years that he played for AEK, he fully confirmed the reputation and the expectations about him. He is also a champion of Greece 2018, and was voted in the top ten of the season for the Super League 2017-18.
GALLERY \\
RELATED NEWS\\
SEE ALL ARTICLES