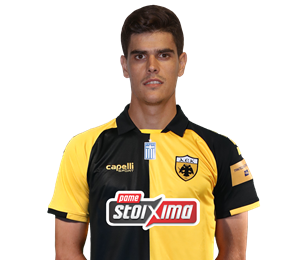 STAVROS VASILANTONOPOULOS \\ Defender
Stavros Vasilantonopoulos born on January 28, 1992 in Avithos Aigion, started his football career locally at Thiela and moved to Panaigialeios in 2009, where he played for three years. Since the summer of 2012 and for the next two years he continued his career at Panahaiki. Ιn 2014 he signed a one-year contract with Apollon Smyrna. He joined AEK FC on June 11, 2015. Over the last three years he has played on loan to Veria and Lamia, before returning in the summer of 2019. In the second half of the 2019-20 season, he played on loan at Polish Gornik Zambrze.