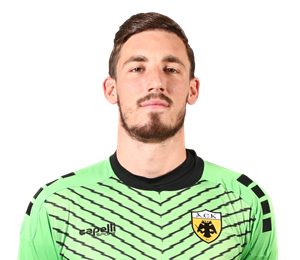 VASSILIS BARKAS \\ Goalkeeper
Vasilis Barkas was born on May 30, 1994 and at the age of 11 became a member of the youth academies of Atromitos. He turned professional in 2013 and he made his debut at the Super League in May of 2016.
In the next season (2015-16) he played 20 times in the domestic competitions.

In the summer of 2016 he made his first big step in his career by signing for AEK FC. During his first year at AEK FC, the young goalkeeper played 21 games at the Super League. He has played in all the “youth” National Teams of Greece and he also traveled to Australia with the main National Team in 2016.

During 2017-18 season Vasilis missed some league matches (in summer of 2017 he had an arm injury which led him to a 3-month absence from the games) but he had more appearances in Greek Cup and Europa League, while his good performances in many games brought lots of positive results for AEK. He has seven matches with the National Team of Greece in 2018.
GALLERY \\