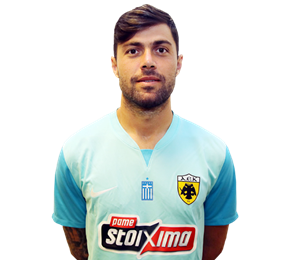 GIORGOS ATHANASIADIS \\ Goalkeeper
Giorgos Athanasiadis was born in Thessaloniki on April 7th, 1993 and had made 100 championship performances with the shirts of Panthrakikos (2012-16) & Asteras Tripolis (2016-19), along with European matches, before joining AEK FC in June of 2019, signing contract until the summer of 2023.

His appearances with our team made him a permanent member of the Greek National Team. In 2021-22 season he played for Sheriff Tiraspol FC on loan, winning the championship and the cup in Moldova, as well as participating in the UEFA Champions League group stage.

In the summer of 2022 he returned to AEK FC and extended his contract with our team until 2025.
GALLERY \\
RELATED NEWS\\
SEE ALL ARTICLES