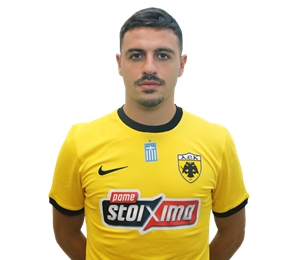 KOSTAS GALANOPOULOS \\ Midfielder
Kostas Galanopoulos comes from the AEK FC Academy. He made his debut with first team on May 31, 2016 against Panionios during the play-offs of Super League and since then is an active member of the First Team.

During the season 2016-17 started to have a more active role as part of the team by making 27 appearances in total, having also scored three goals. He participated in 19 matches of Super League 2017-18 and became the youngest post-war player to be crowned champion for AEK.

He was international with all the youth national teams, while on May 15, 2018, in a friendly game against Saudi Arabia, he made his debut with the Men's National Team. On July 21, 2022, extended his contract with AEK FC until the summer of 2024.
GALLERY \\
RELATED NEWS\\
SEE ALL ARTICLES