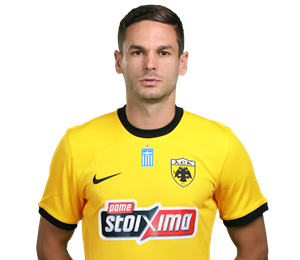 MIJAT GACINOVIC \\ Midfielder
Mijat Gacinovic was born on February 8, 1995 in Novi Sad, Serbia. He took his first football steps in Leotar and then joined the Vojvodina Academy. At the age of 18 (March 2013) he made his debut in the first team, of which he soon became a key member.

In the 2014–15 season, he won the Serbian Cup with Vojvodina and the following year was its captain and top scorer in the league with 11 goals. With the Serbian team he played in 61 games in all competitions (13 goals and 6 assists).

At the age of 20 (2015) he moved to Eintracht Frankfurt. In his first season in Germany, Gacinovic was the protagonist in the relegation playoffs of Bundesliga, after scoring in the first leg against Nuremberg, and provided the assist for the goal that decided everything in the second.

He played in 156 matches with the German team (10 goals, 18 assists), being a key player in winning the cup in 2018 (scoring in the final against Bayern), as well as on the way to the semifinals of the Europa League.

In the summer of 2020, he was transferred to Hoffenheim, making 38 appearances (1 goal, 4 assists). In January 2022 he came to Greece for the first time, on loan to Panathinaikos, playing in 15 games (3 assists) and was the player who won the penalty that decided the final of the Greek cup.

At national team level, he was a member of the U17 of Bosnia and Herzegovina, but then decided to represent Serbia. Was a member of the U19 that won the European Championship 2013 and the World Cup 2015. In March 2017 he made his debut with the Men's National Team, with which he has played so far in 23 games to date (2 goals). On June 2022 he joined AEK FC, signing until the summer of 2026.
GALLERY \\
RELATED NEWS\\
SEE ALL ARTICLES