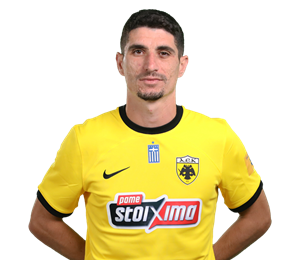 PETROS MANTALOS \\ Midfielder
He was born in Komotini on August 31, 1991 and he plays as attacking midfielder. He started his career at SKODA Xanthi in 2009, where he stayed for five years, having 30 appearances - 6 goals, whereas he also played in the Europa League. He is the captain of AEK FC and on of the most important players of the team. He was the MVP of the Cup Final against Olympiakos in 2016 and and he scored the first of the two goals of AEK FC, which led at the 2-1 win.

In the last two years he is the captain of the team, but he lost six months of 2017-18 season due to ligament injury. He came back on the pitch the day that AEK celebrated the winning of the title by winning Levadiakos 2-0.

He has played for the Greek National Teams Under-19 and Under-21 and in 2014, while he was player οf AEK FC, he made his first appearance with the Main National Team. Since then, he is among the first choices of the National Team head coach, despite the fact of getting injured two times in less than three years.