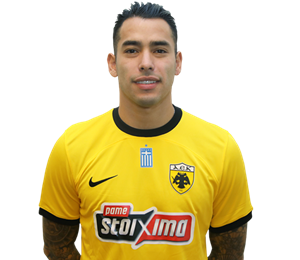 SERGIO ARAUJO \\ Attacker
Sergio Ezequiel Araujo was born in Neuquén of Argentina on January 28, 1992. He became part of the youth academy of Boca Juniors when he was very young and made his professional debut in 2009-10, when he was 18 years old. During his career at Boca Juniors Araujo made 22 appearances and scored 1 goal.

In the second half of season 2016-17, Araujo had 21 appearances in total, with AEK FC, scored 9 goals and he had also 6 assists. His winning goal at the last fixture of the Super League playoffs against Panionios, brought AEK FC at the first place of the playoffs table and made the first crucial step for the returning of our club to the European competitions.

AEK ensure the renewal of player's loan on the last day of August 2017 and Sergio scored 11 times in 23 matches, putting his own stamp on AEK's Championship title. He also had 2 goals in 8 matches in the Greek Cup and one goal in 8 matches in the UEFA Europa League. On January 31, 2020, he signed with AEK FC for third time in his career, playing in 15 Super League matches and scoring 3 times.