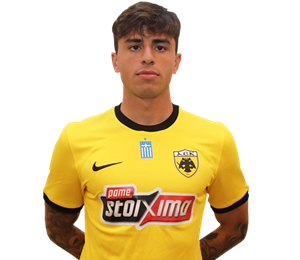 LAZAROS ROTA \\ Defender
Lazaros Rota was born on August 23, 1997 in Katerini. He started his football career from the Iraklis FC Academy. In January 2018, he signed for FC Slavoj Trebišov, making 12 appearances in the 2nd division of Slovakia (1 goal and 1 assist) in the second half of the 2017-18 season.

In the summer of 2018, he was transferred to MFK Zemblin Michalovce, team that he made his professional debut with. He played a total of 48 games (3 goals, 4 assists) before Fortuna Sittard sign him in January 2020. He made a total of 33 appearances in the Netherlands and was released shortly before the end of the 2021 summer transfer window.

Rota was called up to the Greek national team for the first time in September 2020 for the Nations League match against Slovenia, while he made his debut the same year on October 11, in the match against Moldova (2-0). He joined AEK FC in the summer of 2021, signing a three year contract.
GALLERY \\
RELATED NEWS\\
SEE ALL ARTICLES